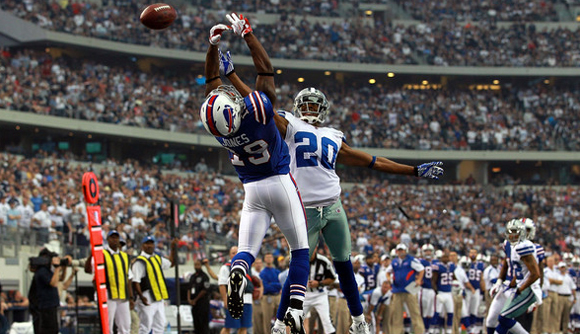 Buffalo and Dallas met in two Super Bowls in the 90’s and will meet again in the NFL week 16, along the second game of the biggest rivalry in the AFC between the Steelers and the Ravens.

The last game on the road of the regular season for Dallas will be in the cold of Buffalo, a place where they have not played in the last eight years. The Lone Star team has won eight of 11 games in the series, including the last three. These teams met twice in the Super Bowl in the early 90s, and the Cowboys took the victory on both occasions led by quarterback Troy Aikman and running back Emmitt Smith. With a renewed attack with the arrival of the running back LeSean McCoy, the Bills are favorites in the betting Odds with -1.0 to win this game and end their losing streak against Dallas. In the last five games against the Cowboys, they are 1-4 SU and 2-2-1 ATS.

Player to watch: Quarterback Tony Romo has played 37 games in December during his career, and he has lost 19. The good news is against AFC teams he has won 24 of 40 he throws fewer interceptions away from home.

This game could define some positions for the playoffs in the NFC, so both will seek the victory. The Packers have won three of the last four but lost on their last visit to the desert (2010) in a great offensive duel. Although Green Bay is considered by many to reach the Super Bowl 50, this game is listed in the betting Odds as Pick’em. If Arizona arrives without injuries, we could see a lot of points scored in the University of Phoenix Stadium. In the last five of the series, the cheeseheads are 3-2 SU and 3-2 ATS.

Player to watch: Quarterback Aaron Rodgers threw four touchdown passes in the last meeting between these teams two years ago and was only sacked once, something the Cardinals will have to change if they want to win at home.

The Colts will be fighting this year to finish as number one in the AFC, something they have not achieved since 2009, so they have to win this game. Chuck Pagano’s team will be in Miami for the first time in six years and have won four of the last five in the series. Miami has not made the playoffs in six years in a row and if they want a chance to end that streak they should win at home. In the betting Odds, this game is listed as Pick’em, and the Dolphins are 1-4 SU and 2-3 with ATS in the past five versus the Colts.

Player to watch: Defensive tackle Ndamukong Suh will be for the second time in his career against quarterback Andrew Luck. The first time was in 2012, and he sacked him once. The former Lions player has 36 sacks in five years in the league.

The AFC North title could be defined in this match, so it will be a very important game for both teams. Pittsburgh will try finish at the top of their division in consecutive years for the first time since the 2007 and 2008 seasons. The Ravens have won the last two in the M&T Bank Stadium and are favorites in the betting Odds at -2.0 to get the victory at home. Baltimore is 3-2 SU and 2-3 ATS in the last five games against the Steel Curtain. Pittsburgh has not won on the road since 2012.

Player to watch: Quarterback Joe Flacco will try to maintain his good performances against the Steelers, as in the last three games he has thrown for 728 yards, six touchdowns, and two interceptions

Swing by NflScheduleWeek16.com; your source for NFL week 16 betting previews, and recaps of the 2015 NFL season.